The Surprising Inspirations Behind the Birth of Heavy Metal 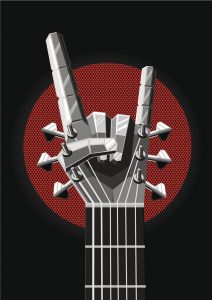 Most people who scoff at heavy metal as a whole and its listeners would be surprised to learn that behind the birth of this style lie some very popular songs and bands, which outputs most of these same critics have even whistled or sang aloud, or that they associate with some of the most important moments of their lives.

No one in their right mind, for example, would ever accuse Eric Clapton of kickstarting the whole heavy metal music, or indicate him as an early heavy metal musician, and yet it’s exactly what happened: he was fronting the extremely popular, chart-topping Cream and producing tunes that are now unanimously considered as the seeds from which the heavy metal tree started to grow, so to say. Songs like “Spoonful” or “Sunshine of Your Love” showed that a more distorted sound, heavier on bass and drums and not just guitar, was entirely possible even to a trio of British friends.

Similarly, pieces like “Purple Haze” by Jimi Hendrix or “Communication Breakdown” by Led Zeppelin took their notes literally higher: the former through the use of a heavily effected electric guitar, the latter thanks to the falsetto-ed, roaring voice of Robert Plant. And we can’t forget “Born to Be Wild”, by the quickly forgotten about Steppenwolf – it came out in 1968 and immediately became an anthem for the biker community, a detail that can’t be overlooked as it was exactly that tribe to inform the style of the first metal-heads, with their leather jackets, boots and jeans.

Other inspirations are less obvious: while “Helter Skelter” by the Beatles has always been quoted as a source of inspiration for the first heavy metal bands, the Fab Four influenced the birth of a genre earlier than 1968. “Twist and Shout”, for instance, or I Feel Fine, from the boyband-like days of the Liverpool outfit, have proved as seminal.

Lastly, the epic quality that is usually associated with many heavy metal bands comes from colleagues that are nothing but rock: Iron Butterfly with their “In a Gadda Da Vidda”, for instance, or “Paint it, Black” by none other than the Rolling Stones. Very diverse influences and, ironically, from bands that have been considered, at one point or other of their careers, as satanists or diabolical. So the main accusation against heavy metal… actually comes from an earlier era.