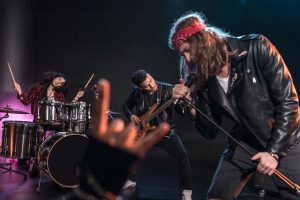 Black Sabbath are unanimously considered as the forebears of heavy metal: there’s no way around it, and including acts like Led Zeppelin in the family tree is, while correct, a disservice to the Ozzy Osbourne-fronted group. While Led Zep were always more influenced by blues, Black Sabbath were born as an actual blues-rock band, but quickly discarded the impact and importance of that style to focus on loudness alone.

Not just that: like with many other instances of great musical inventions, Tony Iommi, Geezer Butler and Bill Ward, along with Ozzy, created a new sound completely out of their circumstances. Life in Birmingham in the mid-Sixties offered few alternatives to younger generations. The city was at the heart of industrial England, and the four lads were as inspired by The Beatles as they were by the incessant noise of the metal-working plants in the city.

Originally named Earth, the foursome had to change their name when they realized that another band was called the same, and famously chose Black Sabbath after a movie starring Boris Karloff that was showing opposite their rehearsal space: a complete chance “encounter”, which has scarred the entire movement. Had they chosen a different name, probably much of the stigma around heavy metal being one with Satan would have never established itself in the first place.

The first three albums by the band are considered absolute classics: Black Sabbath, Paranoid and Master of Reality, respectively, all came out in 1970 and 1971 and found a band at the top of its form: things started to go bad with Osbourne’s addiction to drugs and that meant continuous lineup changes which extended to other band members and only stopped in 2013: it is what, ultimately, ruined the myth of Black Sabbath.