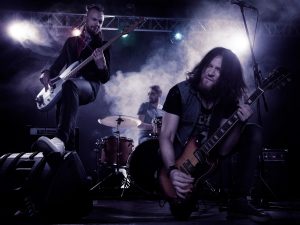 When reading about heavy metal bands (simply “metal bands”, for short) or listening to deejays commenting on songs from that genre, the audience could end up being confused by the usage of another umbrella terms to define all groups making music that’s much more powerful and heavier than the average rock tune. They’re described as “hard rock”, in fact, and most of the times this expression is synonymous with “heavy metal”. This couldn’t be more incorrect.

Generally speaking, hard rock is what happened to rock bands that stuck to their blues influences and didn’t discard them along the way like famous heavy metal acts like the forefathers we discussed in other pages of this site. Their sound, as a result of sticking to blues structures, is more melodic and more likely to find its way to the charts. Therefore, Queen, Aerosmith or AC/DC are hard rock, not heavy metal.

Another distinction is that heavy metal features darker themes in their lyrics, which doesn’t happen in hard rock. Think of bands like Bon Jovi, Ratt, Motley Crue or Europe come to mind immediately in that sense. A correct umbrella term to refer to both styles would be “hard & heavy bands”.